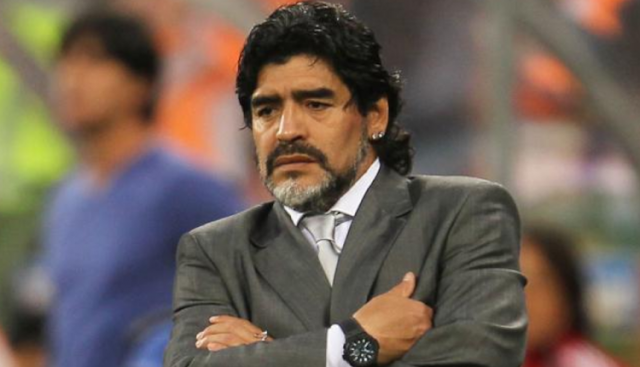 Football legend, Diego Maradona has named Argentine legend, Alfredo Di Stefano as the greatest player ever in football history.
Maradona, who is currently the manager of Gimnasia de La Plata, believes Di Stefano is superior to everyone including Brazil legend, Pele, Barcelona’s Lionel Messi and Juventus superstar, Cristiano Ronaldo.
When asked to name the greatest player in football history, Maradona told AS Argentina: “I think the best was Di Stefano.
He was superior to everyone, including me. Pele did not want to recognize Di Stefano.

“Pele’s friends invented a trophy for him as the living legend of football. But even I have beaten him to become one of the best players in history.”
Maradona added: “I think I’d have quite a few [Ballons d’Or]. But what Messi is doing is outstanding. I would never like to face Messi – not ever. The lad comes home, plays football, doesn’t sing the national anthem and they say he’s Catalan. I don’t criticize Messi [like some others do].”
Di Stefano played for Real Madrid between 1953 and 1964.
He scored 308 goals in 396 appearances for the Los Blancos and won two Ballon d’Or awards during his time at Santiago Bernabeu.
Join Geezgo for free. Use Geezgo's end-to-end encrypted Chat with your Closenets (friends, relatives, colleague etc) in personalized ways.>>